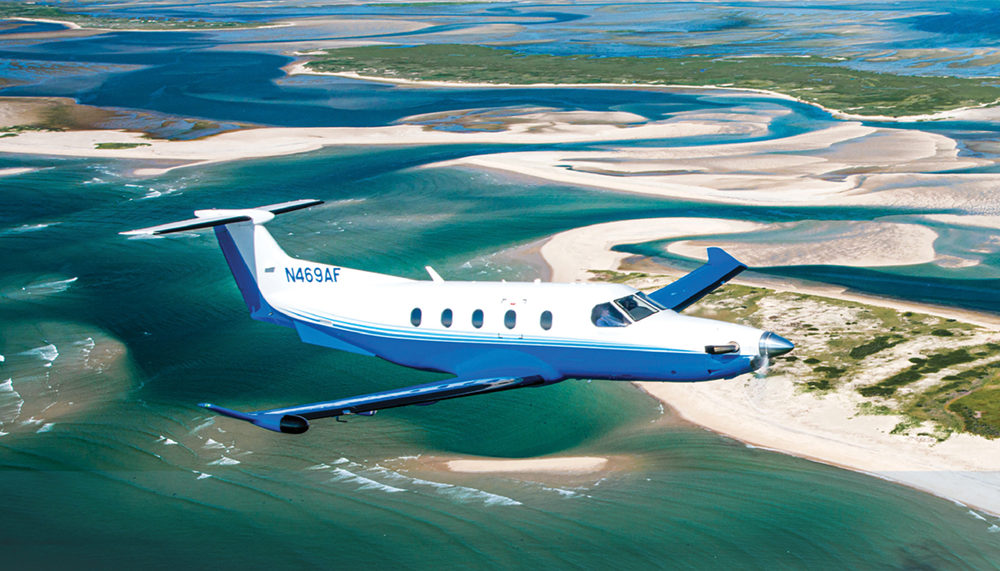 The fractional aircraft ownership community has changed dramatically in the nearly 30 years since PlaneSense introduced its “intelligent solution” for shared ownership, built on a unique and compelling value proposition and the then-new Pilatus PC-12 single-engine turboprop platform.

“Nobody knew these airplanes,” recalled PlaneSense, Inc. founder and CEO George Antoniadis, describing his decision to build the fractional program around the Swiss aircraft as “a leap of faith.” But Antoniadis—an air transport-rated pilot who holds an MBA from Harvard and an electrical engineering degree from Zurich’s Federal Institute of Technology—recognized the potential revolution that the big, modern, and comfortable turboprop represented for the fractional arena.

Since PlaneSense launched in 1995, major fractional brands have ridden booms and survived near collapses and ownership programs large and small have come and gone. With its all-Pilatus fleet, meanwhile, Antoniadis’ company has followed its founding vision and values, consistently growing while forging unrivaled client loyalty and creating a legacy of stability, longevity, and trust. Now, amid an unprecedented surge in demand, supply chain disruptions, and increasing attention to sustainability, the PlaneSense vision and values resonate more strongly than ever, amplified by the completion of a slate of major service initiatives. Among them: the addition of the PC-24 light jet to the company’s fractional fleet; installation of high-speed Wi-Fi aboard all its aircraft; and expansion to full Continental U.S. service coverage with the elimination of the last out-of-area fees.

Like many flight providers, PlaneSense has been challenged by the current environment. In early 2022, it deferred sales of new shares through the end of the year to focus on meeting commitments to existing clients, while adding infrastructure for planned growth. That included expanding staff by 25 percent since the pandemic began and creating a maintenance center in Las Vegas to support West Coast operations. Now, with sales of shares in the PC-12 and PC-24 set to resume in the fourth quarter, Antoniadis took time during a rare non-travel day to talk about what he sees as the keys to the program’s success and what the company is doing to maintain its edge.

A PLATFORM, AND A VALUE PROPOSITION

Today, the PC-12 and the PC-24 are among the most coveted business aircraft, either turboprop or jet, whether for on-demand access, or to purchase new or preowned. Yet Antoniadis believes the PlaneSense value proposition is as important to the program’s success as the aircraft its clients fly on. The proposition is built on three pillars: service, flexibility, and cost efficiency, and team members “have a passion to deliver” on all three, he said.

The world-class PlaneSense service is highly attentive and personalized. “Our goal is to excel in long-term relationships,” said Antoniadis, and the company keeps “a razor-sharp focus on clients’ needs.”

Flexibility comes from the ability of the PC-12, and now the PC-24, “to get people closest to their destinations,” with performance that opens access to thousands of airports that most business jets cannot use. The cost-efficiency pillar rests on having “the most economical aircraft in its class” in both the six-place Pilatus turboprop and the eight-place jet, combined with the fleet optimization enabled by PlaneSense’s unparalleled experience with the platforms, as the world’s largest civilian operator of both models.

“I call it the double economy of scale,” Antoniadis said. “You’re buying only as much aircraft as you need, but the whole asset shows up—that’s the first economy. The second economy is our system: the assets are highly utilized, keeping the operating costs per hour extremely low and the overhead costs minimal.”

These pillars are what Antoniadis believes makes PlaneSense  the intelligent solution for shared ownership. “You can walk away at the end of the flight and pat yourself on the back, knowing you chose the right program.”

The three pillars are also the foundation for the stability, longevity, and trust that characterize the company’s relationships—not only with clients, but with team members and key partners, as well.

“We are relationship-focused, not transaction-focused,” Antoniadis emphasized. He noted that PlaneSense does not off era “most-favored-nation” contract clause that guarantees a client the lowest available terms, simply because equal terms for all is a core company principle. “You don’t need to be looking behind your back to see who got a better deal,” he said. “We commit that the transaction we’re entering with you is fundamentally the same as the previous one, and the next one.” 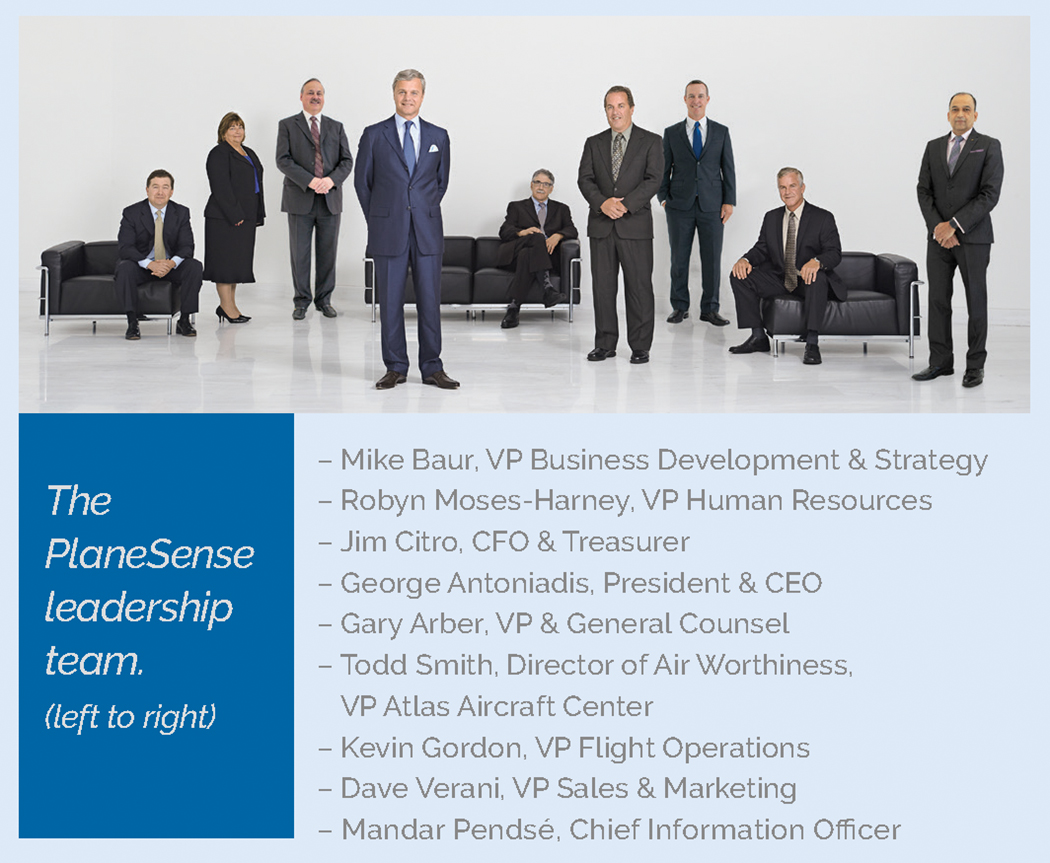 Illustrating the trust and stability that it engenders, even with the large growth in their numbers over the past decade, almost one-quarter (24 percent) of the company’s clients have owned PlaneSense shares for 10 years or longer. Some original shareowners remain with the program, and today the children and even grandchildren of some of them own shares as well, Antoniadis noted with both astonishment and pride.

Of course, excelling at long-term relationships requires meeting clients’ evolving needs, such as desires “for more capacity and speed,” which led the company to become the launch customer for the PC-24 twinjet, Antoniadis recounted. Introduced in 2014, the PC-24 light jet offers outsize performance and advanced features that prompted Pilatus to proclaim it the “Super Versatile Jet.” It’s worth recalling that when the order book opened at the European Business Aviation Convention and Exposition that year, the first two years of production—84 PC-24s—sold out before the show ended. PlaneSense ordered six and inaugurated service with Serial #101, the first ever PC-24, in 2018. By the end of 2022, the fleet will include 11 PC-24 jets.

An emphasis on relationships is also reflected internally. “I like that we have a family feeling,” Antoniadis said, noting that a significant number of the staff “have enjoyed working here for 20-plus years.”

Pilots, meanwhile, have a choice of more than 40 locations to base from, where they can live the lifestyle that suits them best. “Our team members are people, with names, families, and aspirations, and we make sure that all of them are valued for who they are,” he said.

The same approach applies to key suppliers. “Instead of spending energy trying to eke out a better deal somewhere, we spend it on creating deep relationships,” Antoniadis said.

ONE SOLUTION FOR ALL

Though some business aircraft travelers consider fractional ownership out of reach, Antoniadis believes PlaneSense changes the calculus, making it the best option even for many who have jet cards, use charter, or own an aircraft outright—not only for current fractional customers seeking a smarter solution.

As for whole aircraft ownership, “It’s terribly cost-inefficient, unless you fly 300, 400 hours a year,” he noted. Meanwhile, chartering one’s aircraft out to generate off setting revenue “creates a barrier to your own use,” he said. “The reason you own a whole airplane is so that you can fly whenever you want.

Once others are using the plane, you’re removing that flexibility from yourself.”

For jet card customers, PlaneSense “might be a higher upfront investment, but if you calculate the entire cost, it’s much more economical,” Antoniadis said. Moreover, while a blizzard of blackout dates and restrictions can impact costs and access at many card programs, “We have far fewer restrictions than average,” he said.

Another distinction between PlaneSense and jet card programs: “It’s a different kind of interaction and service,” Antoniadis said. “PlaneSense is an extension of your coming home.” And for customers who currently charter and those new to business aviation, “Why compromise?” he asked rhetorically.

“Come to the best service solution, which also turns out to be one of the most cost effective over time.”

THE TOOLS FOR TOMORROW

Going forward, PlaneSense will remain true to its vision and values, Antoniadis said. “We believe in organic growth, and in constantly improving the value of the program for our clients, which results in more clients.” Toward that end, he continued, “The more things we can control that are core to our business, the better we can improve the program.”

That’s why, with safety at the heart of PlaneSense’s operations, the company trains all its pilots and maintenance technicians in-house, he said.

“We have more experience with these airplanes than anyone, so we believe we can train our pilots and technicians better than anyone.”

For nearly three decades, the constant exchange between Pilatus Aircraft and PlaneSense has resulted in an incredible knowledge base, which is the foundation for training, maintenance, and safety initiatives at PlaneSense. The pilot training center at the company’s Portsmouth, New Hampshire headquarters is equipped with customized flight training devices commissioned from FlightSafety International (FSI), and a full-motion PC-12 NGX simulator for the facility is under construction.

Full maintenance operations have been part of the service strategy since the company’s inception in 1995. To ensure quality and safety, the majority of maintenance is performed by highly trained technicians at the expansive, state-of-the-art hangar at the company headquarters in Portsmouth, NH as well as a second facility in Boulder City, NV, added in 2021 to service the increasing flight volume in the Western U.S. and supplement the workload normally handled by Portsmouth.

In addition to robust in-house training, A&P maintenance technicians take part in training through the individual manufacturers, including Pilatus. Meanwhile, to create the next step change in efficiency, the company is developing with thought leaders from MIT an optimization tool that amalgamates big data on aircraft, clients, crews, schedules, and other operational keystones, processed through AI analysis. Initial implementation of this project, which began in 2020, is expected by year’s end. 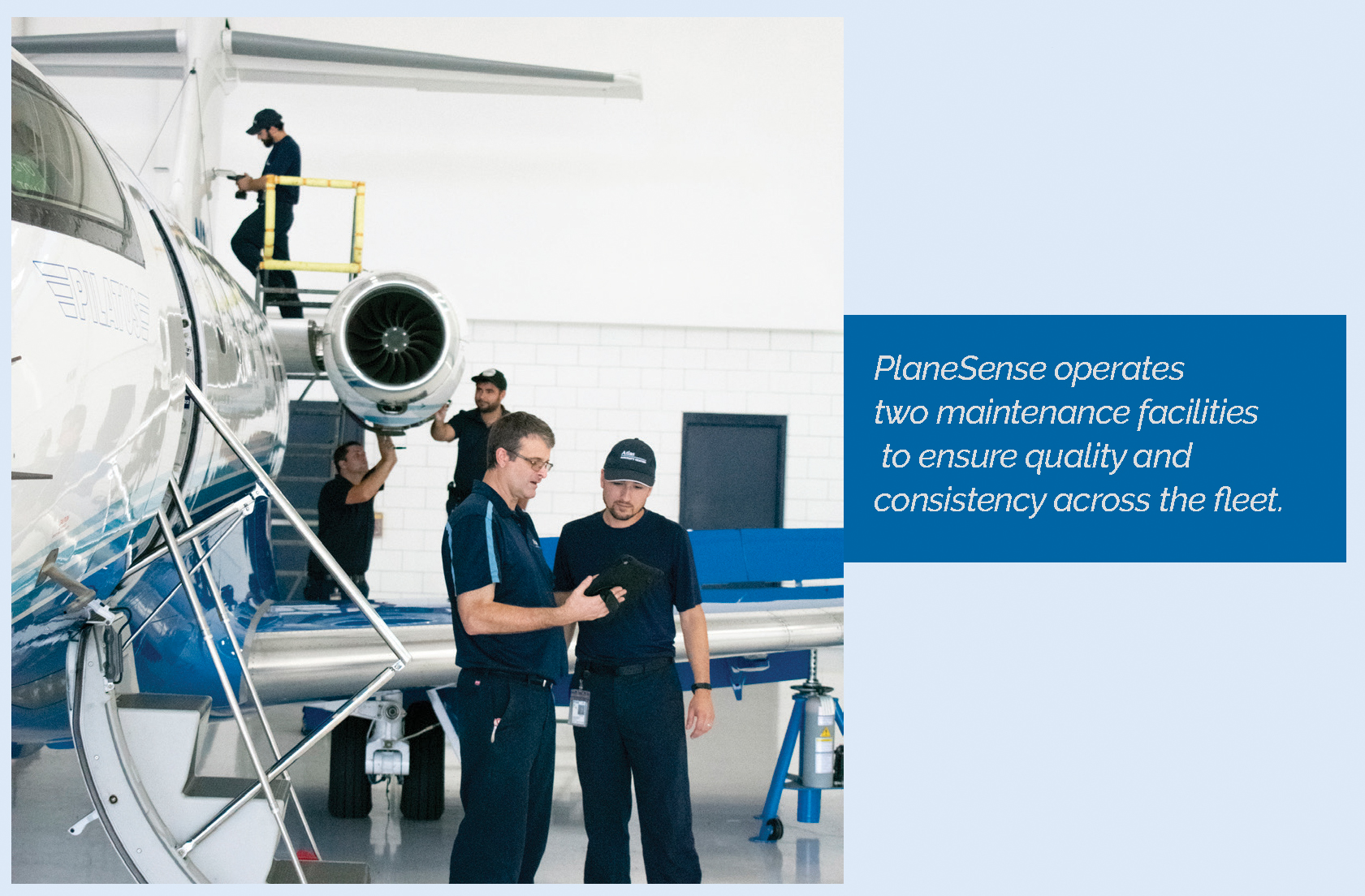 Technology is also helping PlaneSense to meet changing client expectations, though those expectations haven’t necessarily evolved in ways Antoniadis would have predicted. “My stated goal when we started the company was that a human would always answer the phone, and it wouldn’t ever take more than four rings,” he said of his customer service policy. But today, he observed, “People prefer to press soft buttons on their cell phones and not talk to anyone. It does take away from the human touch that I have always thought is so important, but that’s the new status quo. So, we’re constantly developing enhancements on our app and portal so clients can do more that way.”

This article first appeared in a special section of Aviation International News and the Business Jet Traveler Magazine Annual Buyer’s Guide in September 2022.

Five Reasons Why the PC-24 Wins Over the Hearts of Phenom 300 Flyers In the five years since the Pilatus PC-24 jet first joined the PlaneSense® fleet, it has become Read More